The Ballet School of the Royal Theater in Odense is a cultural institution, which stands for presence and charity. There is room for joy, dreams, and reflection – and it is also an institution with very high ambitions and with a high artistic level.

Since its foundation in Odense in 2001 they have shown us, numerous performances based upon the fairy tales of H.C. Andersen – either alone or (often) in collaboration with other cultural institutions, such as the Theater of Odense, the Symphony orchestra of Odense or the Festivals of H.C. Andersen Festivals – and these performances have taken place not only on established stage floors but also in the streets and alleys.

A small selection of the performances centered around H.C. Andersen within the last few years have been: Grantræet, Snemanden, Snedronningen, De 5 papirklip as well as countless performance shows, which have taken their starting point in the world of H.C. Andersen – and yes, even at our own annual Award ceremony the Ballet School has been a fixture with their performances. 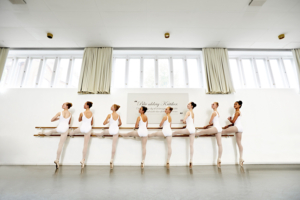 The Royal Theater Ballet School Odense
for interpreting the fairy tales of H.C. Andersen through classical ballet and modern dance for many years.