Lorena Ojeda Dávila has through the release of this translation “Temepeni wantantskweecha Hans Christian Anderseniri p’urhe jimpo”(!) made it possible to read 10 fairy tales in the language of Purépecha. And these translations are not even found on the usual top-ten list of the most popular fairy tales:  ”Grantræet”, ”De vilde svaner” og ”Den lille pige med svovlstikkerne” are probably among the most known fairy tales in this translation but you can also read very powerful fairy tales such as ”Bedstemor,” ”Pigen, som trådte på brødet” and ”Nabofamilierne”. As the book is handed out free of charge and are available on the internet the book is now readily available to everybody who can read Purépecha. We are quite confident that a great number of people will enjoy this book, and that the publication will contribute the strengthen the special relationship that exists between Denmark and the region of Michoacán. As some may remember a Danish Fransiscan monk, Jacob, was expelled from Denmark during the Reformation. Jacob may even have been a Danish prince, and would you believe it: he travelled to Michoacán, where he learned the local language of purépecha! 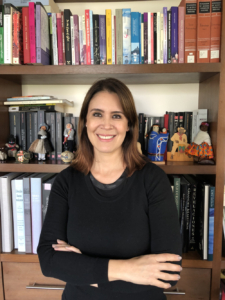 Lorena Ojeda Dávila, Mexico
for the publication of ten fairy tales by Hans Christian Andersen in the Purépecha language (2019).