Nowadays, where almost everybody uses some sort of computer, either at home or at work, it is strange to think of the fact that when we started planning the Hans Christian Andersen Multi Media in 1993, the education authorities’ use of computers had barely begun.; it was being used in the administration, and only as a electronic writing tool.

We were inspired by an analogue tool on the Domesday Book, the English land survey dating from the times of William the Conqueror. It was our ambition to create a ­similar, but digital project with a work of ­reference on the life and works of Hans Christian Andersen. The School ­Department of the municipality of Odense was responsible for the management of the project, and the department also provided a programmer, Alan Sørensen.

Erling Gormsbøll supplied necessary source material from the Hans Christian Andersen Museum. Orfeus, which was an organization pioneering and coordinating local authorities’ development of computer-based educational tools and materials, provided the link to the European Union and was very helpful in doing research for us, in drawing up official applications and finding partners. We got partners in England, Holland, Germany, Spain and Italy. The final result was a comprehensive CD-ROM, comprising information on the life and works of Hans Christian Andersen in six languages and issued in the above countries. The clue of our work was to follow in the footsteps of Hans Chris­tian Andersen, to find and to show the connection between the places he ­lived in, whether in Odense, on Funen, in Denmark or in Europe, how he was inspired by them and how this resulted in artistic creativity. Karsten Henningsen 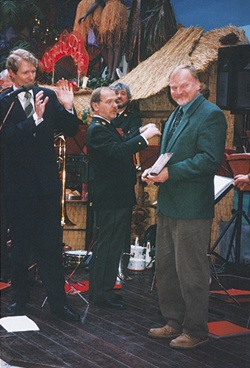