It was a great honour to receive the award in 2008. The award honoured the creation of a house in which the Hans Christian Andersen fairy tales, known and beloved all over the world, become alive and tangible, for children and their parents alike. We consider the award a token of acclaim, both of the visionary idea of creating Fyrtøjet, fostered many years ago by a group of enterprising people, and of the work of the following decades to implement the visions and plans. In particular, we would like to call attention to the contribution of Inger Lunn, Conny Stolberg-Rohr and Aase Zori. They have created a marvellous and world unique platform for the communication and dissemination of the fairy ­tales, where a variety of modes of artistic expression, such as storytelling, theatre, visual arts and music, allow visitors to identify actively with the tales. The award was more than a pat on the back; to us, it also confirmed the importance of continuing the work of promoting the fairy tales, of communicating them with due respect for their authenticity, of calling the attention to the fact that Hans Christian Andersen wrote fairy tales which continue to be important and continue to be important to communicate, both as they contain universal and eternal truths, and as they are the manifestation of an unique universe, in which both children and adults can recognize them­selves and their surroundings. 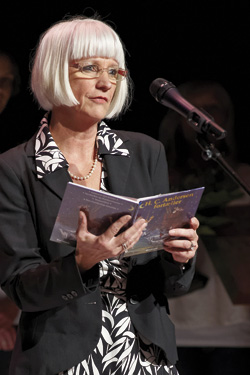 Fyrtøjet – Children’s House of Culture in Odense for having created a marvellous children’s universe.