For many years Ingrid has interpreted H.C. Andersen in her performances – such as The Ugly Duckling, The Shadow, The Little Mermaid, The Staunch Tin Soldier, The Red Shoes – and finally but not in the least Thumbelina.

During 2015 the company was on tour with the performance Thumbelina all over Denmark – from Copenhagen to Aalborg – under the title ”a water adventure on tour in Denmark in Danish harbors and water settings”. The performance takes place on a platform placed in the water and used the harbor and water setting as a scenic background. The rough harbor milieu is mixed with the fleeting and adventurously aesthetic expression of the dance and gave its audience the chance of experiencing the harbor in a whole new way.

Dancing in a harbor setting is a fine example of the manner in which Ingrid Kristensen works. She develops stages and instructs way outside the traditional setting – always at a creatively high level and with heart. 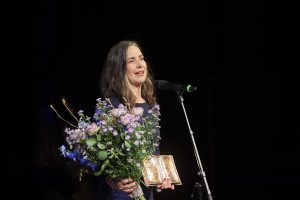 Ingrid Kristensen, Denmark, for her creative, poetic and and marvelous interpretation of HansChristian Andersen through dance.