When I was a child, we had a large collection of fairy tales from all over the world at home. Among them, I found Andersen’s The Tinderbox. I didn’t understand the meaning of the three dogs, the first with eyes as big as saucers, the second with eyes as big as mill-wheels, the third with eyes as big as the Round Tower. I thought that some­thing must be wrong with those eyes, because towers are not round. Then I forgot about it. Later I began studying Danish at the University of Rome and discovered a number of ­other authors from the country far away in the North, and I discovered that to all of them, a prolonged travel to my city of Rome had played an important role in their process of formation. So my formation consisted in travelling the other way. When arriving in Denmark I actually saw the Round Tower in Copenhagen and realized the meaning of the words of the fairy tale. I realized that behind the words of his fairy tales there was a whole new reality, a new world to acquire. When the Andersen award was presented to me, I felt it like a sign from this world to receive the award in the native town of Hans Christian Andersen and to be welcomed with such distinctions. When I was a little boy reading Hans Christian Andersen for the first time and having no idea about what the Round Tower was, I never imagined that one day this would happen. 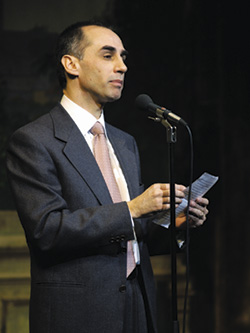 Bruno Berni, Italy for his Italian translation of the fairy tales and stories of Hans Christian Andersen