He has edited the critical edition of Hans Christian Andersen’s fairy tales in five volumes(1963 to 1967) and has contributed to the commentary (vols. six to eight) to that edition, the Andersen Memorial Edition (five volumes, 1970-75) together with Estrid Dal; „Christines Billedbog“ (Christine’s Picture Book) (1984), translated into several languages.

The Hans Christian Andersen Award Committee presents their award to Erik Dal for his lifetime research and promotion achievements. He is the leading Andersen scholar of his generation. He has never been reluctant when colleagues asked for his help, and he has generously shared his knowledge in writing, at symposia and conferences. He has stimulated the works of many others and opened new perspectives on the treasures to be found in Andersen’s work. Of course, when presenting the award The fairy tale of my life, it must be mentioned that his intensive scholarly work has been done in a deep understanding with his wife, Estrid Dal, and some­times in a close cooperation with her. 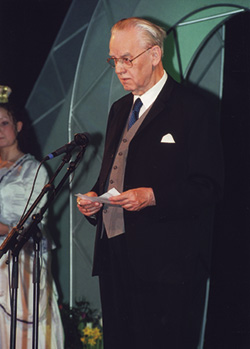 Erik Dal for his lifetime Andersen research and promotion efforts