There is an old Danish saying to the ­effect that Honour is the fairest tree in the wood. But for the H.C. Andersen Festspillene, being honoured with an award is not all. To us, the award also means the acknowledgement of a long-standing festival project, the idea of which was fostered way back in the sixties by actor Klaus Pagh, and which led to the first actual performance ­taking place in 1965. In a cooperation with then director of tourism, Jørgen Erik Schreiner, the festival gradually was developed into what it is today, where we can look forward to soon reaching our fiftieth festival performance in 2014.

It was with a deep feeling of awe and pride that Jørgen Erik Schreiner, the then chairman of the Hans Christian Andersen Festspillene, received the award in 1997 in the banqueting hall of Egeskov Castle. 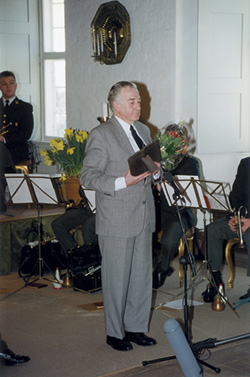 H.C. Andersen Festspillene for their performance of Clumsy Hans