You are here: Home1 / 2019 Pivot/Mette-Louise and Jesper Kryger

For more than a century, it has been entirely in the spirit of old poet to transform his fairy tales also into ballets, and the Hans Christian Andersen Award has consequently and previously been awarded ballet productions. But with the Pivot’s performance in 2018, the Andersen universe was transformed into an unprecedented variation of well-known themes and in an unprecedented mix of genres, dance and movement, music and sound, written word and vibrant paper cuttings by Torben Jarlstrøm Clausen. “The 5 Paper Cuttings” was a performance that challenged all our senses and brought some of Andersen’s always thought-provoking ideas to life in an updated style – to put it mildly!

It testifies to Pivot’s special understanding of Andersen’s poetic universe, that his fairy tales, his own personal experience and understanding hit us right on target in “The 5 Paper Cuttings”, in the middle of an overwhelming bombardment of senses, including ballet shoes and hoverboards, “In Denmark I was born” and Gwen Stefani, and “ real ”paper cuttings as well as high-tech visuals! The committee of The Hans Christian Andersen Award finds that all this was a result of Pivot’s strong artistic ability and of a long-standing series of dance productions with modern interpretations of Andersen both in Denmark and abroad. 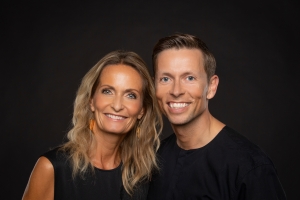 Pivot/Mette-Louise and Jesper Kryger, Denmark, for the show “The 5 Paper Cuttings” 2018 and for several other dance performances since 2005.