On his first international journey, Andersen made a visit to the small town of the Italian Riviera, Sestri Levante, and really made it a small fairy tale. Although he spent only one evening in October 1833, he described it as “a fairy-like night of beauty”! Likewise, it is a fairy tale in itself that now for the 22nd year, a festival is being organized in the name of Hans Christian Andersen and for the – hold now – 52nd year, fairy tale awards are to be given in the poet’s name. In connection with the establishment of the fairy tale awards, one of the city’s two coves – as beautiful as you only find them in Italy – was even named “Baia delle favole”, “The Bay of Fairy Tales”. You find the name on all official cards.

In addition to the fairy tale award, the city of Sestri Levante has since 1998 every year in early June organized a 4-day festival in Andersen’s name, where children and adults together may experience music, theatre, reading, acrobatics and many more exciting shows in the city’s beautiful settings. – Also Odense’s own Hans Christian Andersen Parade has been invited to perform their famous show. The festival has grown larger and larger over the years, and in recent years it is estimated that the 4-day program attracts about 80,000 guests. In its lifetime, the festival has thus far exceeded one million spectators. 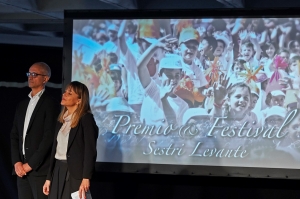 Andersen Premio & Festival, Sestri Levante, Italy, for many years of promoting new fairy tales and for outstanding festival events in the name of Hans Christian Andersen.