Thanks to Michel Forget the French speaking Andersen enthusiasts can finally get to know Andersen as a traveling storyteller and poet.

Michel Forget has a background as a philosopher and has translated works such as A Walking Tour from Holmen’s Canal to the East Point of Amager, Shadow Pictures of a Journey to the Harz, A Visit to Portugal or A Poets Bazaar. He is also a specialist on Kierkegaard and has published articles and kept lectures on the works of Andersen. He has also translated research articles and played a prominent role in the meeting between Danish, French and other international Andersen experts. 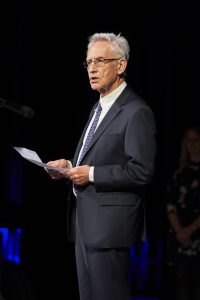 Translator Michel Forget, France, for his decisive expansion of the French Andersen-repertoire.