I cried with joy when I was informed that I had been chosen to receive the award. I had spent five years of hard, but also rewarding, work with trans­lations of Hans Christian Andersen, with thorough studies not only of his other works, his dairies, his letters and his biography, but also with the necessary studies of the reception of his works and the understanding of him in Poland. It took me three years to find a publisher willing to throw himself into publishing a new Andersen translation competing with the one already existing, which was thought to be „The world’s best translation of Hans Christian Andersen’s fairy tales“; in reality, it was an obsolete translation from German, the oversweet language of which fixed him as a teller of nursery tales and deprived his fairy tales of a great part of their artistic qualities. Having received the award is an ­honour and an obligation. I will do everything I can to make as many as possible of Hans Christian Andersen’s other works available in Polish. The wish to do so is strengthened during the annual reunions with the „family“ here in Odense, which also give me the opportunity to learn still new things about Hans Christian Andersen, the world’s most marvellous author. 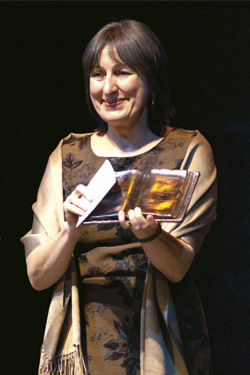 Boguslawa Sochanska, Poland for her thorough and respectful Polish translations of the fairy tales and stories of Hans Christian Andersen