Antanas Markuckis, producer and director of the Panevezys puppet theatre in Lithuania, has contributed with his travelling theatre towards making Andersen’s fairy tales come alive all over Lithuania, even in the smallest town where theatre is a thing unheard of. Markuckis and his summer theatre, drawn by a team of horses, is known all over the country. Each year, the theatre produces a new puppet show based on an Andersen fairy tale. Markuckis began his work as a puppet theatre director and producer in his hometown of Panevezys 16 years ago. His puppet theatre interests were directed towards Andersen, when he, then still only a schoolboy, won a second prize as a director of producer of his own puppet theatre; the award-winning puppet show was based on Hans Christian Andersen’s The Goblin and the Grocer. After having finished drama school he returned to his native town and established his puppet theatre in a horse-drawn carriage. This was the beginning of the travelling puppet theatre, of which Markuckis has been the director for the past 16 years.

In 1992 the theatre established itself permanently in a former Panevezys department store and was officially acknowledged as a professional theatre. Today the staff comprises 23 members, spending a large part of their time promoting Hans Christian Andersen and his fairy tales. This they do partly in the permanent theatre, partly – and here above all- when they tour the provinces of Lithuania in the horse-drawn carriage for one month each summer. 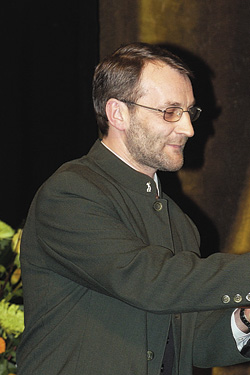