Danish-born Diana and her American husband Jeffrey embody every translator’s fantasy of splitting one’s soul into two equal parts, one for each language. Together they have produced a version of Andersen that is sensitive to the original, yet all their own. Its idiom is contemporary without being newfangled – and beautifully nostalgic without being olde worldy. Since its first publication in 2005, it has stood the test of time and has established itself as the new text of reference throughout the English-speaking world.

Diana and Jeffrey Frank have both had distinguished careers in the media: Diana, who holds a PhD in linguistics, as a TV producer for ABC and NBC News – Jeffrey as a senior editor at The New Yorker, and as a writer and editor at newspapers such as The Washington Post and The Washington Star. We are grateful that they have found the time and energy to spread the word on Hans Christian Andersen in their own country (and beyond) through books, articles, lectures at universities and festivals, on National Radio in the U.S., and on the BBC. Their work on the committee of the Hans Christian Andersen Storytelling Center in New York has been invaluable. Over the years, they have continuously reminded their audience of the deep affinity between Hans Christian Andersen and American culture in his own lifetime. We are proud that he has found such dedicated champions of his work in present-day America as well. 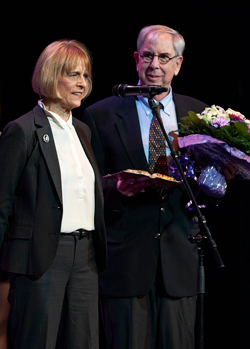 Translators Diana and Jeffrey Frank, USA for their joint translation of selected stories and fairytales of Hans Christian Andersen.