Lending lustre to the town, to the world and to the theatre

Hans Christian Andersen was born in Odense. That’s quite true. And it also quite true that it was at Odense Theatre that Andersen first took an interest in the theatre. He became friends with the theatre’s bill-sticker and actually managed to take part in a performance and thus got his stage debut at the theatre.

It would then seem quite natural that Andersen celebrations took place regularly at Odense Theatre. With the exception of special jubilee occasions this, how­ever, has not been the case. Milestones such as the centenary of his death in 1875 were celebrated with a gala performance, also broadcast live on the then only Danish TV channel. Apart from ­that it has not been a part of Odense ­Theatre’s image to mark the red-letter days of the genius from Funen.

To be the host or venue of this ceremony means a lot to Odense Theatre. International celebrities and members of the royal ­family mix with actors, theatre workers, a variety of Odense citizens and other good people in the cosiest atmosphere imaginable. We are also happy to draw attention to the fact that many of the performers were originally educated here at the theatre and have now become famous, although of course not on Andersen’s scale. 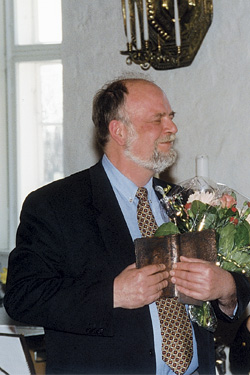 Odense Theatre for The Travelling Companion