I think that The Little Mermaid represents a kind of love unique in literature, a love so strong that you leave your own world, in which you are beloved and considered beautiful, in order to join another world, where you are a helpless thing of no use. The mermaid sacrificed her nature and the world in which she belonged, at that is the greatest sacrifice of all. Those are words of John Neumeier, artistic director and chief choreographer of the Hamburg Ballet. Neumeier is the great master of dramatic and romantic story ballet. He has lived and worked in Hamburg for more than thirty years, and during those years he has choreographed a succession of great ballets innovating the dance theatre. Like nobody else, he has renewed the ballet as dramatic art. Through the combination of classical ballet moves, techniques and steps with the body language of modern theatre, he has deepened the ballet’s possibilities of depicting the depths of the soul and infinite longing, the tension of human souls between the gutter and the stars. He sees many of his ballets’ figures as „dreamers“, and for a long time Neumeier has been fascinated by Hans Christian Andersen as such a dreamer; he realized that The Little Mermaid should be interpreted as a piece of autobiography. As a choreographer, Neumeier then faced the artistic problem of telling and linking two stories, as he wanted both to recreate the fairy tale and to tell a story about the poet. With his grandiose ballet, The Little Mermaid, he managed to solve the conflict of these two levels and to create out of them a redeeming symbiosis. The ballet had its premiere in Hamburg in 2005. Possibly, this ballet is not only the most important contemporary ballet based on a Hans Christian Andersen fairy tale, but is also carries validity as ­a modern classic which deserves to establish itself in the repertoire of ballets all over the world. 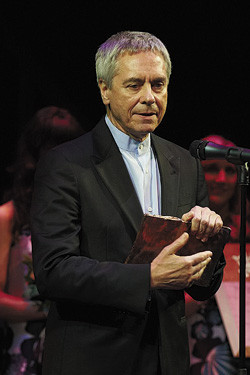 John Neumeier, Germany creator of the most important Andersen ballet of our time, The Little Mermaid