8th December 2003 was the date on which I received news that I was being considered for the Hans Christian Andersen Award. I am a professor at the Paulista State University Júlio de Mesquita Filho, in the State of São Paulo, Brazil. I came here twenty years ago to work with children, telling stories in squares and schools and discussing the classic tales of childrens literature from Brazil and the wider world. I am the only Brazilian researcher to have written a doctoral thesis about Hans Christian Andersen, and two of my students, writing their mastership dissertations about this author, have focused on some of his stories. My researches have not come to an end but recognition of my work came with the award. In this sense, I wish to say that to receive the award, as well as having been an honour, contributed greatly to spreading awareness of my studies and literary activities. To receive an award such as this carries a very great responsibility which I try to carry out by continuing the work I started, not only by research but, ­chiefly, with children and through books which make the life and writings of HCA more widely known through a working method stemming from the stories Andersen wrote. 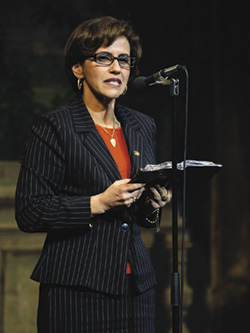