I have often asked myself, if fairy tales could become something actually happening in real life, and my own answer to the question was that it does happen, but not very frequently. I became quite convinced of that when the international Hans Christian Andersen Award was presented to me. To me, this award really was the great Fairy tale of my Life, although I had then already received several Russian and international awards, among them the International Board of Books for Young People’s Hans Chris­tian Andersen Award in 1983, the Astrid Lindgren Memorial Award, and an international prize for my Russian translations of German and Scandinavian ­literature, awarded to me in Finland on the 12th of November 2009. Yes indeed, fairy tales can become real. Hans Christian Andersen has been my life’s companion. My essays about him have been published in Denmark, Estonia, Latvia, Germany, Japan and other countries (I even had no hand in translating them). In 1982 I was invited to a conference in Odense, where I had the opportunity to meet other Hans Christian Andersen experts. Since then, I have returned to Odense many times. In 2005, I was named a Hans Christian Andersen ambassador. I am infinitely grateful to the Award Committee for its wonderful work. I will not cease to devote my time to the works of this great author. In 2008 I published a monograph about him, and in 2009 and 2010 anthologies of his fairytales and stories have been published, which were translated and annotated and included major essays by me; and there are still new projects in the pipeline. To sum up, Hans Christian Andersen is the ‘Travelling Companion’ and the ‘Fairy Tale of My Life’. Once more, thank you 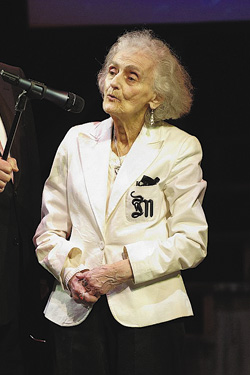