You are here: Home / 1999 Starbright Foundation

The committee has presented its award to a most original project, which is so much more than the usual children’s book.

The fairy tale has been illustrated by a wide number of artists and has been rewritten by a number of celebrities, who also narrate the fairy tale on the CD enclosed with the edition. It is remarkable that through the joint efforts of those illustrators, writers and narrators, the fairy tale does not fall apart or develop into widely different directions, but appears as a beautiful, unified whole. Here you do not only have Steven Spielberg as the Honest Boy, but Harrison Ford and Melissa Mathison, his wife, as the villainous weavers, Madonna as the Empress, Robin Williams as the Court Jester, Calvin Klein in the role as The King’s Underwear, Fran Drescher with her very distinctive voice as the Heralding Horn, and Norman Schwarzkopf, of course, convinces in the role as the General.

Adding a number of musicians and members of The Starbright Foundation to the above, almost one hundred men and women, all of them busy peo­ple with a tight time schedule, have spent their precious time on this project in order to tell us a well-known fairy tale in a fun and different way. The Starbright Foundation’s main objective with this project was not to promote Hans Christian Andersen, but the cause of sick children. But again, the activities of the foundation are completely in Hans Christian Andersen’s spirit, as he himself grew up under ­difficult circumstances and had to rely upon the help of benefactors. 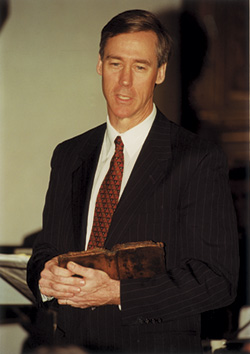 The Starbright Foundation for their untraditional interpretation of The Emperor’s New Clothes in words, sound and images