After the Andersen Award was presented to me five years ago, in 2005, we have done a lot in the school to improve the children’s physical surroundings. With the support of Danish institutions and funds we have managed to create better conditions for the smallest groups of children, the ones aged 13 to 15 years. The dining hall has been thoroughly renovated, too and the dining hall has been decorated with motives from the Hans Christian Andersen fairy tale Soup on a Sausage Peg, and in the hall we have erected a throne, on which the children are al­lowed to sit on their birthday. On an ­experimental basis, we allow the chil­dren to participate in putting up the school menu and in cooking the food. For the past four years, we have grad­ually been replacing the old school fence with a ‘fairy tale’ fence with a golden gate, and we have erected a tower, where we hoist a Hans Christian ­Andersen banner, a white flag with a red sun. The golden gate is only un­locked once for each child, on the day he or she leaves school to go home. Fairy tale therapy also is among the school’s teaching programs. In 2005, the year in which Hans Christian Andersen’s bicentenary was celebrated, we published a calendar with photos of the children and the most important data of the school year. We are also preparing a a magazine containing stories about the school and about future plans for it. Since 2005, we have continually been trying to integrate fairy tales in the daily life at our school. 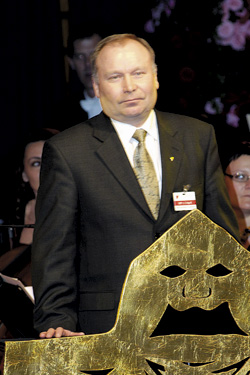 The Sebesjskoje specialnoje professionalnoje School, Russia for the school’s successful educational use of The Ugly Duckling. The award was officially received by Sergej Semjonov